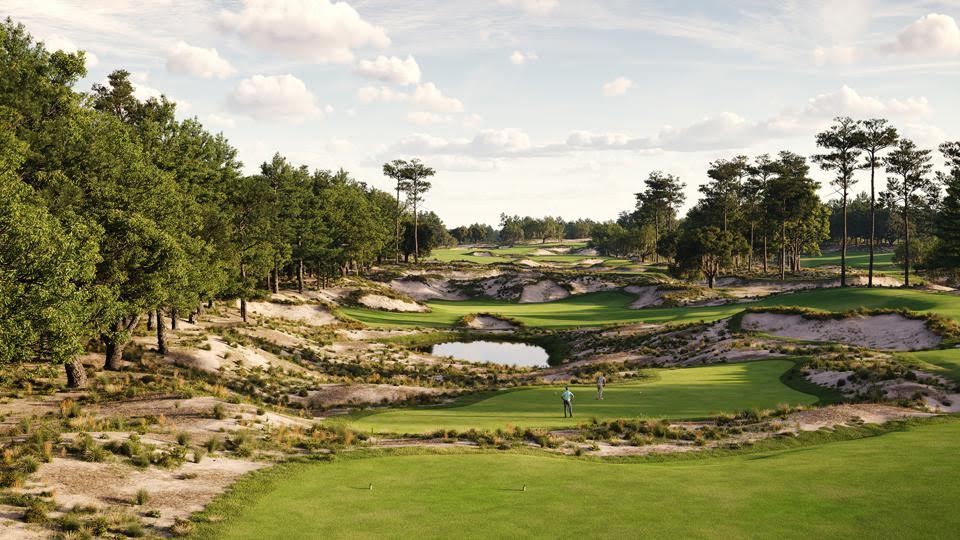 Cabot has found a unique way to make its first U.S. property stand out, even in the best-supplied golf state in the nation: a 21-hole course.

The unprecedented course concept at Cabot Citrus Farms in Central West Florida is appropriately named “The 21” and will feature a diverse mix of holes ranging from 85 to 560 yards when it opens later this year.

While Cabot Citrus Farms has two existing 18-hole courses that are being renovated, The 21 is an entirely new layout designed by golf architect Mike Nuzzo, who was given leeway to fit as many great holes as possible into a 100-acre parcel of the 1,200-acre property. Initially, the plan was for two extra courses of 10 and 11 holes, respectively. And while that’s still true in some respects, Cabot co-founders Ben Cowan-Dewar and Mike Keiser decided to combine the two into the new 21-hole concept after taking a closer look at the overall property.

The 21 is also unique in the world of golf – in a category of one when it comes to the total number of holes.

The Ohoopee Match Club in Georgia has a 22-hole layout, while Haig Point’s Signature Course on South Carolina’s Daufuskie Island has 20 holes, but there are currently no 21-hole courses in the United States. At one time, a West Virginia facility called Parkersburg Country Club planned to have 21 holes, but the extra holes beyond its 18-hole routing aren’t in use and mainly used for sod purposes today.

Other North American golf destinations have embraced unconventional hole totals for their short courses: the Sandbox at Sand Valley (Wisconsin) is a 17-hole par 3, Bandon Preserve (Oregon) has 13 par-3 holes, Quicksands at Gamble Sands (Washington) is a 14-hole par 3 course, and Mountain Top at Big Cedar Lodge (Missouri) is a 13-hole routing that has a mix of par 3 and par 4 holes.

When completed, guests and members at Cabot Citrus Farms will be able to be play the 21-hole full course or two different sides that have a bit of a Blackjack theme.

The 10-hole course, called simply The Ten, is more conventional. While the early course routing sketches don’t list par, it has three holes that would be considered par 3’s — 115 yards to 180 yards — and one par 5 hole of 560 yards. It also features six holes of traditional par 4 yardage, four of which are between 285 and 305 yards, essentially “half-par” holes.

Showcasing the diversity, the 560-yard fourth hole will have greens and landforms that resemble holes in Ireland, while the following hole, the 355-yard fifth, is expected to be more reminiscent in look and feel of the Australian Sandbelt.

When open, there will be different pricing options for The Ten, The Ace and the full 21. At this point, the rough shaping for The 21 has been completed and irrigation is being installed as finish shaping gets underway.

All of the Cabot courses are expected to be open for guest and resident play in December of 2023.

Located about 60 miles due north of Tampa and 80 miles west of Orlando, the Cabot Citrus Farms property was formerly known as World Woods and had two heralded Tom Fazio-designed courses that weaved their way through sandy soil and rolling hills as well as towering pines, palmetto trees and ancient moss-covered oaks. Cowan-Dewar says the plan is for the two 18s — newly named Cabot Barrens and Cabot Oaks – to have the “firmest, fastest conditions in the south.”

Architect Kyle Franz is redoing the forested layout at Cabot Barrens and teaming with Nuzzo and Golf Course Architecture Advisor Ran Morrissett on the redesign of Cabot Oaks, which winds through sandy, scrubby areas, not to mention a 40-foot-deep sinkhole, adjacent to the other course. While the Barrens will feature rugged aesthetics and wide corridors of play, the Oaks course features design elements inspired by Alister MacKenzie and has repeated 50-foot elevation changes across the property.

Cabot Citrus Farms is also a residential community and, in addition to its progress on the golf side, is launching sales for its collection of 36 two- and four-bedroom cottages in February. Some cottages will be situated along the golf courses, while others front the main street of a community that will also feature retail, restaurants, fitness and spa amenities, communal gathering spots and a farmer’s market.

Adaptive Golf of Sarasota currently meets once a week on Thursdays at the Palms Golf Club at Forest Lakes. But what is Adaptive Golf and why should we know about