BRADENTON’S NELLY KORDA IS THE HOTTEST PLAYER ON THE PLANET 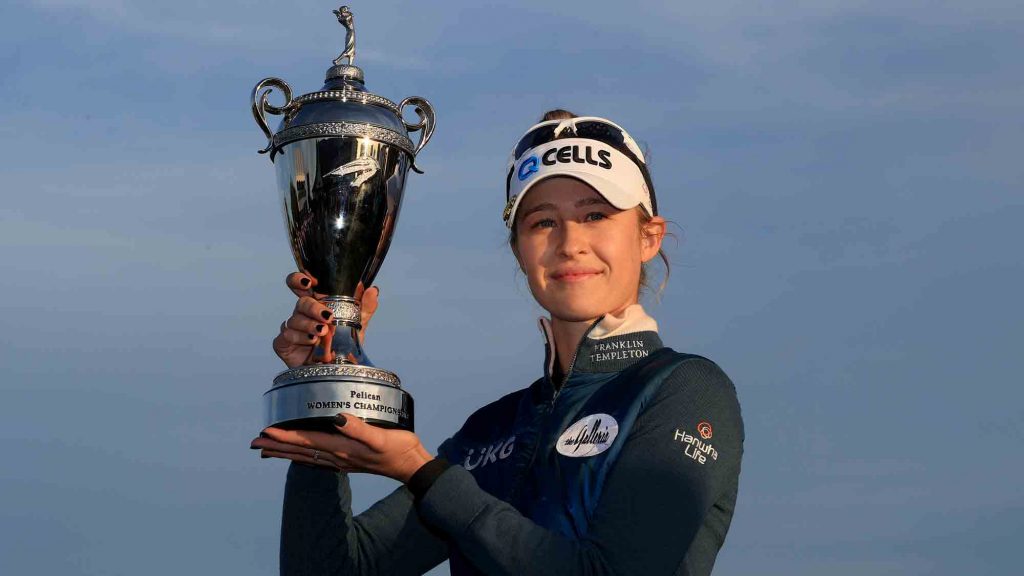 On an unseasonably cool day in Belleair, Fla., the hottest player on the planet, Rolex Rankings No. 1 Nelly Korda of Bradenton, bounced back from a triple bogey on the par-4 17th at Pelican Golf Club to win the Pelican Women’s Championship presented by Konica Minolta and Raymond James. Korda carded back-to-back birdies on No. 18, from 21 feet in regulation and 23 feet the first hole of a four-way playoff, to capture her fourth victory this season and seventh of her career.

“I honestly lost hope,” said Korda, referring to her bad break on 17. “I was like, ‘Okay, just try to make a solid par because 18 is a really tough hole. If you have a chance for birdie, then try and go after it.’ But my caddie [Jason McDede] really kept me in the moment and I didn’t give up. Thank God I didn’t.

“Jason was like, ‘I want you to take one minute and just think positive thoughts, no negativity.’ So, I just thought about the putts I made, particularly No. 6. I made that right-to-left birdie putt, so I thought about that and just seeing the ball go in the hole.”

Korda joins Rolex Rankings No. 2 Jin Young Ko, who shot a final-round 66 to finish in a tie for sixth, as the only players with four wins on the LPGA Tour this season. The 23-year-old also becomes the winningest American in an LPGA Tour season since Stacy Lewis won four times in 2012. The gold medal Korda won at the 2020 Tokyo Olympics in August would make five victories, but Olympics do not count toward LPGA statistics.

“I think the major [KPMG Women’s PGA Championship] was the hardest because it was back-to-back events. It was my first major and that’s what I wanted for so, so long,” Korda said. “Growing up, I didn’t think, ‘Okay, I want to play in the Olympics. I want to win a gold medal.’ It was, ‘I want to win a major.’ That one definitely ranks really high up.

“But the gold medal, you know, comes once every four years. It’s such an honor to stand on that podium in front of the flag and put your hand across your chest. I had chills go through my entire body and I got really, really emotional. Thankfully I had the mask on.

“I always say that every event has a different meaning and every event has a special meaning to me, but obviously my first major, the gold medal, winning in front of my parents for the first time in [Lake] Nona, coming back, having all these expectations on me, not playing for a while and winning here, winning at Meijer [LPGA Classic] after missing the cut at the U.S. Open, being so down. Every win is special.”

After the triple bogey, Thompson stood on the tee box of No. 18 with a one-shot lead over Lydia Ko and Kim, who were both in the clubhouse. She stuck her approach to four feet and failed to convert. Then in the playoff, Thompson found the exact same spot with the same result to share second.

“Had an amazing week. Played solid golf. So many players played amazing golf, Nelly as well, obviously,” said Thompson. “Played a lot of good golf, made a lot of good putts, and just wasn’t meant for me in the end.”

Brooke Henderson rounded out the top five, using a final-round 65 to finish 14-under for the week and secure her seventh top-10 result of the year.