BUCKLEY WINS LECOM IN A PLAYOFF 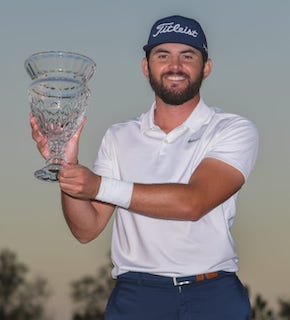 “I didn’t want to play two holes; I’m tired and my legs hurt,” laughed Buckley after his playoff victory. “It’s hard to believe. To get up there and do what you know you have to do, knowing it will change your life, it’s hard to put into words. It’s just a lot of relief, knowing I can plan a schedule. I have a whole year no matter what and I can compete for a TOUR card.”

With two holes to go, it looked like Clemson alum Billy Kennerly would cruise to victory. Kennerly held a two-stroke lead standing on the 17th tee box, but double-bogeyed the 17th and bogeyed the 18th to miss the playoff entirely.

“With three or four holes left I felt out of it,” reflected Buckley. “Billy was playing so well all day, I think he had a three-shot lead with four to play. I think he bogeyed a few coming in and all of the sudden we were tied going into 18.”

Buckley was the last player in the field and learned he had gained entry into the field approximately 15 minutes before his tee time early on Thursday morning. He raced to the range to hit 10 balls and then made it to the tee in time for his 7:17 a.m. tee time.

“It is painful warming up in the dark but getting the call 15 minutes before and going out and shooting a bogey-free 68 is awesome,” said Buckley. “I really made one bogey through three rounds. That was some of the best golf I’ve seen from myself in really ever.”

On Sunday, Buckley sandwiched a bogey at the fifth with birdies at the fourth and sixth to turn at 1-under. He countered a birdie at the 11th with a bogey at the 13th before parring out the remaining holes. He noted the turning point in his round the par-5 ninth, where he saved par after almost losing his approach shot.

“I don’t even think the crowd saw it, I hit it right over them and it plugged,” said Buckley. “From there honestly I saw the flag and just swung. There’s not much you can do except rely on what you do at home…but that ninth saved me. Just saving par, it could have been a double bogey to take the steam out of me. I think I’ll look back on that shot and making par. It was just a grind.”

With the win, Buckley leaps from 85th to 27th in the points standings. This is his rookie season on Tour after a year on the Mackenzie Tour – PGA TOUR Canada in 2019. Prior to that, Buckley attended the University of Missouri where he began as a walk-on and left with the lowest scoring average in program history.