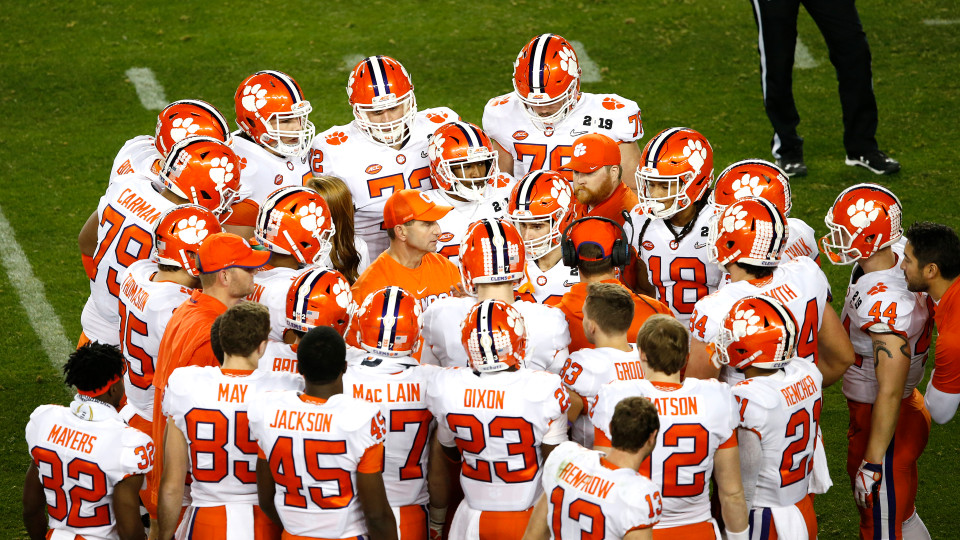 The PGA Tour’s wrap-around season is getting some criticism from national media, and it is probably justified.  It started too soon after the FedEx Cup Championship is the gripe.
Even some of the PGA Tour stars are more interested in college football than playing golf. I didn’t see many big names in the past two tournaments.
Justin Thomas, who attended Alabama, was probably keeping tabs on another ‘Bama romp. Jack Nicklaus, who graduated from Ohio State, is a great fan of the Buckeyes.
Bruce Koepka went to Florida State, but the way the Seminoles are playing, he may be better off playing golf.
In keeping with the Tour’s connections to the college football power teams, it is only right that we do too.
For the unknowing, only four college teams get selected for the year-end playoffs.
Currently, Clemson (Lucas Glover), Alabama (Justin Thomas), Georgia (Bubba Watson, Kevin Kisner) , Oklahoma (Abraham Ancer), Ohio State (Jack Nicklaus), LSU (David Toms),   Auburn (Jason Duffner) and even Florida (Billy Horschel, Gary Koch and Sarasota’s Scott Dunlap to name just a few) are the front runners for the final four.
That only leaves Oklahoma. The Sooners stiffest tests will be Texas, which has produced a number of Tour players, including Jordan Spieth,  and Oklahoma State (Rickie Fowler).
My final four picks? I think Glover, Thomas, Watson and Ancer will be watching more football than golf.

Bradenton pro golfers Jessica and Nelly Korda each produced 3/12 points in the Solheim Cup in Scotland.

GOLF NEWS
COMMENT: THERE NO LOSERS IN MATCH FOR CHARITY

After it was over I am not sure any of the participants cared about the outcome, but it will go down a 1-up win for Tiger Woods and Peyton Manning