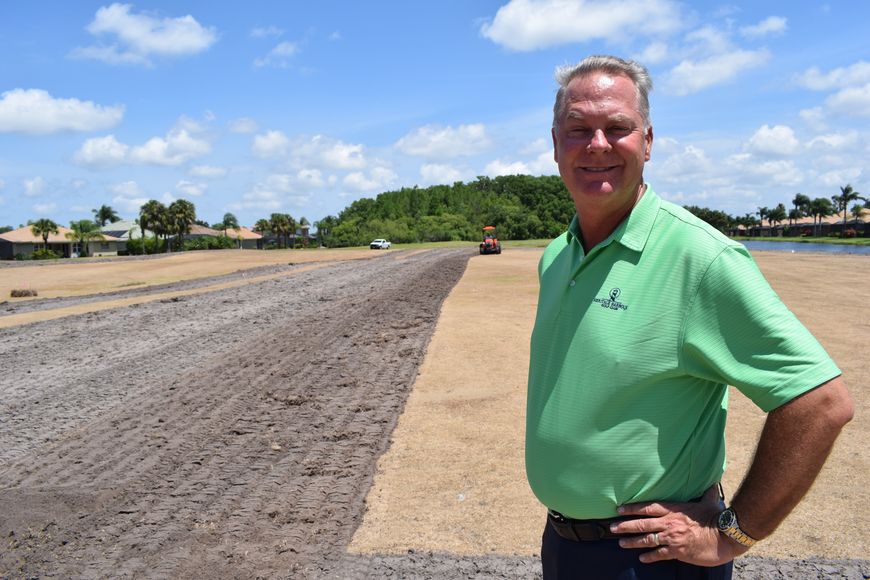 The hotel and resort villas will give Heritage Harbour a stay-and-play identity in Bradenton.

At the land use meeting May 5, Manatee County Commissioners unanimously gave the Heritage Harbour Golf Resort and Lodge its stamp of approval, clearing the way for the ambitious project to become reality.

Mark Bruce, the club’s managing partner, announced plans in January 2020 to build villas and a lodge that would fill a void in the area’s lack of “stay-and-play” golf courses. The project would cover 15 acres and would basically be located where the No. 1 and No. 2 holes currently run along River Heritage Boulevard and Heritage Green Way.

In October 2021, Bruce introduced ResClub as a development partner in building Heritage Harbour Golf Resort and Lodge. The plan had changed slightly to allow people the opportunity to own or rent time in the furnished vacation villas or lodge suites.

The commissioners were impressed with the project, which was designed to pump much-needed funds into the Heritage Harbour Golf Course that was in need of upgrades.

“I’ve been on this board for 10 years, and I can only remember only one other time that something came before this board when everyone in the crowd was in favor of the project,” said Commissioner Vanessa Baugh, who now represents Heritage Harbour in her District 5 because of redistricting. “This is an exciting project, and I am anxious to see it.”

Hotel, villas on the way

The approvals at the land use meeting were for a 100-room hotel and 74 villas. The excitement in the project is evident as 24 of the 30 paired villas in phase one already have been reserved. Bruce said if construction proceeds as expected, people could begin staying in the villas in the second half of 2023.

Twenty of the 74 villas will be owned by ResClub. Those will be available for vacation rental while the other villas will be for purchase as a seasonal residence or an investment asset.

“PGA Professionals all start their career in golf, dreaming about winning big tournaments,” Bruce said. “As a 25-year member of the PGA, I certainly don’t stand a chance at winning a major championship, but this accomplishment certainly feels like it.”

Bruce said the course opened in 2001 as Stoneybrook and changed its name to Heritage Harbour Golf Club in 2018.

Bruce was trying to find a way to bring in the revenue that would allow investment into the course to bring it back to its championship course level. The process is about to begin.

The course will be closed from May 2 to Nov. 1 as a $2 million renovation will take place.

Landscape and golf course architect Nick Campanelli, 38, of Glastonbury, Connecticut was chosen for the design job. The original architect, Arthur Hills, died May 18, 2021.

“When this course first opened, it was built to be dramatic,” Bruce said. “It had big, deep bunkers that would penalize the golfer for a bad shot. That doesn’t bode well for common golfers.”

Bruce wanted to find an architect who would allow Hill’s original design to live on and be recognizable, but he also needed a design that would fit with a modern, championship level of play and yet be friendly to the resort golfer.

“We wanted to go with an up-and-coming architect with fresh thoughts,” Bruce said. “We needed someone who had the ability to see how every player would see a hole — women, children, good players, and bad players.”

“I tend not to follow the mold,” Campanelli said. “I focus on strategy and playability. And this is not going to be a punishing design.”

With the resort golfer in mind, and five tee complexes on each hole, Campanelli designed a renovation that would remove the equivalent of 50 bunkers from the course, and would allow recreational golfers to use the ground more instead of being forced to carry shots to the target all in the air.

He also lost 300 yards from the length of the former design because the construction of the villas and resort would sit approximately where the No. 1 and No. 2 holes were.

Bruce fell in love with Campanelli’s design as soon as he submitted it.

“Nick did a fantastic job of protecting the natural integrity of the design, but he changed the penalty aspect.”

“Honestly, it was perfect,” Bruce said. “And it will be just as difficult.”

Bruce said he offered Campanelli the job, with the agreement he could have some input on the final design.

“I’ve played all over the U.S. and on dozens of the greatest courses in the United Kingdom,” Bruce said. “So let me have 15% input. He did.”

Campanelli said bunkers still will be in play, but if beginner golfers land in them, they are not so difficult it is going to ruin their round.

“We fully intend to be sold out before the end of the year,” Williamson said. “We’re about to launch (similar projects) in eight cities.”

Williamson heaped praise on Bruce for guiding the project through the permitting and planning stages without a hitch.

“The team here did a fantastic job, step-by-step,” he said. “You always leave yourself with the expectations of hiccups, but Mark hasn’t had any. Everything the guy says he will do, he does. That is very rare.”

Williamson said in October he has been involved in the time share and vacation club industry for more than 20 years and he wanted “to build a better mousetrap.”

“We are the anti-time share,” he said. “That industry still is predatory. I spent a lot of sleepless nights because we were putting a lot of people in that industry and it was not good stewardship of their money. This is the evolution of it.”

Williamson said participation in ResClub leads to a revenue stream.

He said an explosion in the amount of vacation rental properties like VRBO and Air BnB has made the market ripe for ResClub.

Bruce said the timetable hasn’t been set for the project. He estimated the hotel/resort would break ground in 2023 and be open by early in 2025.

In September, Bruce said golf course packages will be available to the public.

“There will be a variety of membership offerings, and for daily play,” he said. “We will always have an open door to the public.”

Heritage Harbour currently has 3,770 homes and it will have 5,074 at buildout.