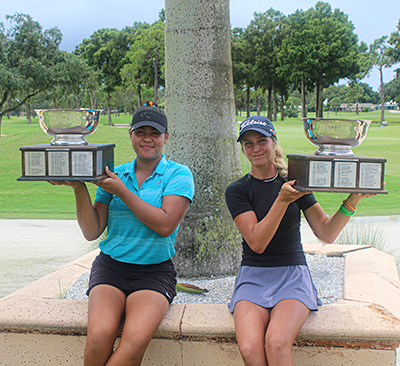 BRADENTON – It was Angelica Holman and Jordan Fischer who came out on top on Friday (July 2) at the 62nd Girls’ Junior Amateur Championship at Bradenton Country Club. Holman captured the 16-18 Division with a 3-under 217, while Fischer was victorious in the 13-15 Division at 1-under 215.

“It means so much to me to win this event,” Holman said. “I’ve had a lot of ups and downs. After winning States, I didn’t have the best rounds. But I got to practicing real hard, with my dad helping and supporting me the whole way.”

Beginning the day two shots back of the leader, Holman began the round with a birdie on the second hole. She finished the front side at 1 under to take a one-shot lead over the field, a lead she wouldn’t soon let go.

The Fort Pierce native continued her strong play with a birdie on the 12th and added another on the 15th. She posted a bogey-free 68 to secure the three-shot victory at 3-over 217. Her final-round 68 was the low round of the championship, along with Katlyn Huber’s second-round 68.

“I had a great round today, everything was well-put together,” Holman said. “My putting was really on today.”

This is the first FSGA championship victory for Holman, who finished the championship with rounds of 77-72-68.

Lauren Clark took home a runner-up finish in her final Girls’ Junior appearance, finishing the championship 6-over 220. The incoming Louisiana State University freshman used rounds of 72-78-70. Holman and Clark were the lone two players in the 16-18 division to card under par or better.

Caroline Patterson and Sabree Lefebvre both took a share of third place, ending the championship at 7-over 221.

Fischer began the round in second place, one shot behind the leader. She got off to a fast start with birdies on two of the first four holes to take the outright lead. The North Fort Myers native ran into some trouble with back-to-back bogeys on the fifth and sixth.

Making the turn even par, Fischer finished the 10th with a double bogey. She quickly turned it around with back-to-back birdies on 11th and 12th. Fischer birdied two of her final three holes to secure the four-shot victory with a final-round 69.

Fischer earned her first FSGA championship with rounds of 77-69-69 for the week. She was the lone player in the championship to card two under-par rounds.

Huber used rounds of 76-68-75 to take home a third-place finish at 5-over 219. Gabriella Albert and Bella Dovhey finished the championship tied for third at 7-over 221.

BOYNE FALLS – BOYNE Golf’s own Jeff Roth had to wait an extra year to defend his record sixth win in the 29th Tournament of Champions, which starts Monday at