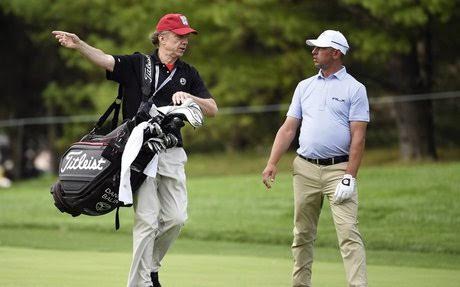 Everyone wants to be known for something.

But for actor Michael O’Keefe, it took nearly three decades before he was able to embrace being known as Danny Noonan, the caddie he portrayed in the wildly popular 1980 comedy “Caddyshack.”

O’Keefe admittedly enjoyed playing Noonan, but deep down he wanted to be appreciated for his variety of work – one which includes an Oscar nomination for Best Supporting Actor in “The Great Santini,” recurring roles on hit shows like Roseanne, Homeland and several spots in the Law & Order series, among many other movie and TV credits.

Instead, he often hears “NOONAN!” while walking down the street.

“They still yell at me in my sleep,” O’Keefe said on The Caddie Network’s ‘Under the Strap’ podcast. “People in my dreams call me ‘Noonan.’”

After years and years of being recognized as Noonan, O’Keefe said something happened in 2007 that allowed him to embrace it.

“I had a great thing happen – one of the many great things that happened while I was caddying at the Open a couple of weeks ago,” said O’Keefe, who caddied two practice rounds in the 2020 U.S. Open for PGA Professional Danny Balin at Winged Foot, a place where O’Keefe caddied as a teen in the early 1970s. “Jimmy Roberts did an interview and I was able to tell him this story about how my whole way of relating to the movie changed in 2007.”

That year, O’Keefe was shooting a TV pilot and the wardrobe designer, he explained, was a big fan of Caddyshack.

“When I came in for the meeting, almost one of the first things she said was, she mentioned the movie,” he said. “And, you know, actors are always wanting to be remembered for bodies of work and different performances. Me, personally, I wouldn’t mind it if somebody recognized my work, say, from the 21st century.”

Nevertheless, O’Keefe graciously thanked the wardrobe designer and didn’t think much of it until the two had a chat a little later.

“She said, ‘my dad just passed away from leukemia about six weeks ago and the only thing that relieved the tension for my family was to sit with him in the hospital and watch Caddyshack.’”

“When she told me that, any kind of lingering hang ups I had about being Danny Noonan in peoples’ minds, they all just went away,” O’Keefe said. “Because I realized how important the film was for her and her family. But then it also spoke to how important the film is for the whole culture. People just love Caddyshack. So, the short answer to your question should have been, ‘everybody should have my problem.’ I don’t mind if people call me ‘Noonan.’”

People have had to make adjustments due the coronavirus pandemic over the last seven months, trying to find silver linings in an otherwise difficult time. QBE Shootout tournament host and