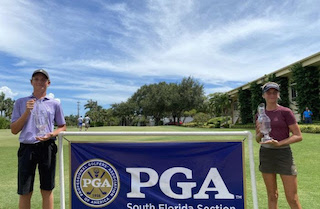 This is starting to become repetitive: Jordan has won another PGA Junior Major title. The 15-year-old North Fort Myers student won the Patty Berg Junior Championship by 11 shots July 26th at Cypress Lakes Golf Club in Fort Myers. She fired a 3-under 69 to finish at 6 under 210, comfortably ahead of Miramar’s Madyson Gold.

It was Fischer’s third consecutive junior major win in the South Florida PGA Juniors after she won the Nicklaus Junior Championship and the South Florida Junior Open. Her combined margin of victory in the three events is 26 shots. Madyson won the Patty Berg 16-18 division.

“It is pretty cool to know my game is headed in the right direction,” said Fischer, who recently turned 15 and works on her game with her father. “My short game was ‘pretty good’ this week, especially my putting. I try to focus on my own game and not worry about what the other competitors are doing.”

Noah Kent of Naples won the boys overall title by one shot over Lake Worth’s Tyler Stachkunas. Noah had a one-shot lead and was facing a 25 ft. birdie putt on the 17th hole when play was stopped for about an hour because of a thunderstorm. When play was resumed he made the putt to take a two-shot lead. Stachkunas won the 16-18 title.

In its 28th year, the Patty Berg Junior Championship, named after the World Golf Hall of Famer who was a founding mother of the LPGA and longtime Fort Myers resident, is one of the longest-running junior events in Florida. Patty and fellow Hall of Famers Gene Sarazen and Herb Graffis were co-founders of Cypress Lake Golf Club.