This historic course was designed by Donald Ross in 1926 and was recently restored so the Ross features were brought back to life. False fronts on many of the greens and bunkers that epitomize the Ross design theory are evident throughout the layout.

There are no condos or homes bordering the fairways. This course was routed through beautiful orange groves and natural wooded areas. In the late 50s, Pinecrest hosted the first nationally televised PGA event, the World Championship of Golf. It featured big names like Sam Snead, Gardner Dickinson, Don January and the winner, Dr. Carey Middlecoff. The Pinecrest Hotel was a favorite getaway for celebrities from sports, entertainment and politics before being razed in 2007. Among the frequent guests were Babe Ruth, Al Capone and Franklin D. Roosevelt. 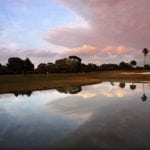