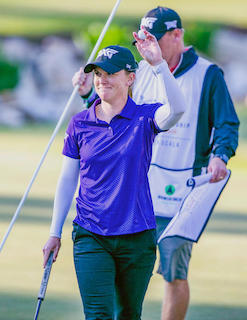 The LPGA Tour’s elite were in Southwest Florida a month ago. But many of them will be coming back, this time to Fort Myers for the first time in 47 years.

The LPGA Drive On Championship, which was played in Ocala and won by Austin Ernst in March 2021, is nearly set to be played at Crown Colony Golf Club from Feb. 3-5, 2022.

General manager David Kent emphasized that the contract still is not signed, but is in a revision stage.

Golf Channel had first reported that the event would be coming to Fort Myers.

The LPGA Tour website has the tournament listed on it, and the location “Southwest Florida” with a $1.5 million purse.

The CME Group Tour Championship has been played in Naples since 2012, and at Tiburón Golf Club at the Ritz-Carlton Golf Resort since 2013. Jin Young Ko won the tournament on Nov. 21, taking home a $1.5 million first-place check.

The Fort Myers event will not have a gallery or sell tickets. Crown Colony members will be able to attend the 120-player tournament, which also will not have a pro-am. It also will only be streamed on the Golf Channel or NBC’s Peacock service, and not be televised.

Feb. 3-5 is a Thursday-Saturday, with the final round not played on the usual Sunday.  There will be a Monday qualifier on Jan. 31, but only practice rounds the following two days. The field will be cut to the top 70 and ties for the final round.

The LPGA Tour came up with a pair of Drive On Championships similar to this one in 2020 to fill gaps in the tour created by the coronavirus pandemic, which had prevented play in some areas in Asia and Australia in 2020, and also earlier this year. This tournament fills a gap in the schedule before the tour is scheduled to go to Singapore and Thailand in March.

The Fort Myers tournament will be the week after the Gainbridge LPGA at Boca Rio in Boca Raton. It also creates a three-tournament swing, with the tour opening its 2022 season with the Hilton Grand Vacations Tournament of Champions in Orlando from Jan. 20-23.

The last LPGA Tour event played in Fort Myers was the Greater Fort Myers Classic in 1974 and 1975, at Lochmoor Country Club. Bonnie Bryant, a left-hander, won in 1974, and Sandra Haynie won in a playoff against Pat Bradley in 1975. Haynie coincidentally also won the Naples Lely LPGA Classic that same year.

Kent said he received an email from South Florida PGA Section executive director Geoff Lofstead a month ago asking if the club would be willing to having a conversation about hosting an LPGA Tour event. The process just grew from there, including talking with Andy Bush, a partner at Outlyr, the company that took over the LPGA Tour events previously managed by Octagon over the past year and also owns and runs the PGA Tour Champions’ Chubb Classic in Naples.

Kent said an LPGA Tour agronomist was scheduled to visit the club, located off Winkler Road south of Summerlin Road, on Monday.

“We’re happy to help the tour, obviously,” Kent said. “This is a fabulous opportunity to continue elevating the awareness of the club and the brand, knowing that this is a unique, one-off opportunity.

“Given the parameters, we were fortunate with the week on our club calendar that we didn’t have anything major to preclude us from hosting. It’s a great opportunity to host the best female golfers in the world on such short notice.”

Kent said the Crown Colony board was “incredibly supportive.”