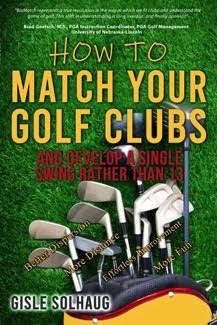 Golfing greats Jack Nicklaus and Tiger Woods did not become the top-two major champions of all time without understanding the importance of being fitted with the proper golf clubs.

And golf’s ‘Golden Bear’ and the game’s longest-reigning World No. 1 knew if they were to remain competitive, it had to be a strong relationship between player and each club in their golf bag.

Gisle Solhaug identified why there might be breakdowns in this relationship, and that’s why he established BioMatch.

BioMatch is a true golfing revolution in how those playing golf, not only at the highest level but those of us who play just on the weekends, are fitted with golf clubs.

And Gisle is now sharing this revolutionary approach in a ground-breaking new book: How to Match Your Golf Clubs, and Develop a Single Swing Rather than 13.

Yes, we’ve all read how to putt like Jack, how to chip like Tiger or how to play the flop shot like Phil, but we’re never read what it takes to get golf clubs weighted and fitted for the individual.

The patented BioMatch system takes the guessing game out of matching a set of clubs by weight and weight distribution and explains it using scientific methodology.

The BioMatch system brings club fitting into the 21st century, and it will make golf an easier game to play.

How frustrating it is to be able to put a good swing on your driver but only to come up short with a swing on a wedge that is more akin to trying to swing in a phone box?

BioMatch is the first scientific solution to the problem of matching golf clubs and with the system available online so that the game’s worldwide network of club fitters can place 13 clubs in your bag that will have you recalling the same swing on each.

BioMatch may not turn you into the next Tiger Woods, Bryson DeChambeau, or Lexi Thompson, but it will have you swinging sweetly with clubs correctly fitted and weighted that reflect your own golfing DNA.

How to Match Your Golf Clubs, and Develop a Single Swing Rather than 13 is published on Amazon.com and is on sale from Saturday, 29th May, 2021.

The eBook is priced at $7.00, while a printed, full-color version is available for the very reasonable price of $19.99