NELLY KORDA WINS TOURNAMENT WITH FOE’S FIANCE AS HER CADDIE 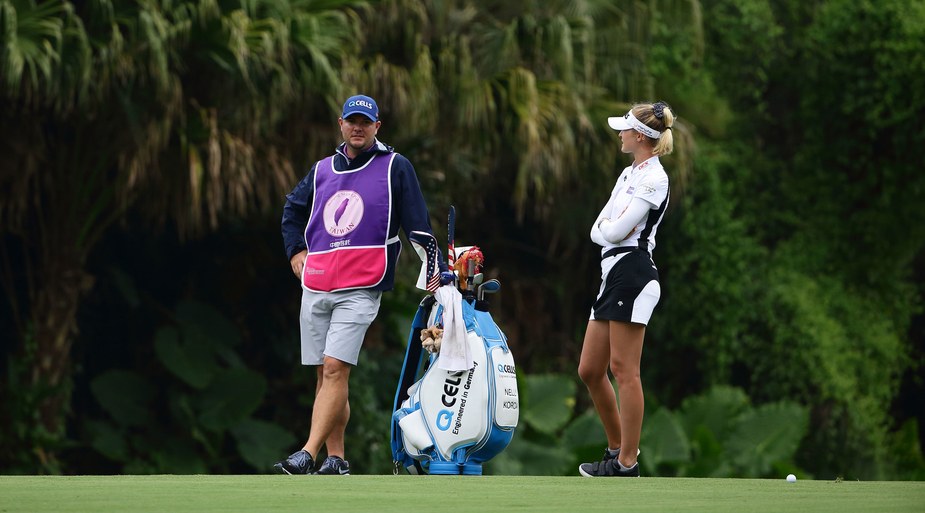 This story may be the weirdest of the fall golf season.
Never mind that Bradenton’s Nelly Korda won her third career LPGA title by repeating as champion at the Taiwan Swinging Skirts LPGA on Sunday (Nov. 3).
Good for Nelly but that’s just half the story.
On the back nine at Miramar Golf Country Club in New Taipei City, Korda looked to be on her way to victory, having made four birdies and two bogeys through 12 holes to get to 20 under par for the tournament. She was two strokes clear of the field after starting the day with a three-shot lead. But as the talented 20-year-old American was trying to close out her third career LPGA title, she began to show her nerves.
Three-putt bogeys on the 14th, 15th and 17th hole dropped Korda to 17 under and brought her playing partners in the final threesome, Caroline Masson and Minjee Lee, back into play. Masson made birdies on 15 and 16 to get to 18 under to take the lead heading to the 18th, with Korda and Lee one stroke back.
Korda regrouped on the par-5 18th, thanks in part to the calming influence of her caddie, Jason McDede, who happens to be Masson’s fiancé. A tap-in birdie after nearly chipping in for eagle got Korda back to 18 under. Lee also birdied to finish a three-under 69, and when Masson made par to close with a 68, it was off to a three-player playoff.
Back to the par-5 18th, Korda was the only one to find the fairway off the tee. On the advice of McDede, Korda clubbed up with her second shot, playing a 5-hybrid into the wind from 200 yards, finding the green and setting up a chance at eagle. She’d come up just short with the putt, but the birdie was enough to give her the victory.
Korda praised McDede afterward, saying without the pep talk he gave her between the 17th and 18th holes the tournament might have slipped away. The irony that McDede was helping Korda beat his future wife was not lost on the eventual champion.
“Yeah, Jason is engaged to Caroline, but at the end of the day, he is on my team and I am the one signing his paycheck,” Korda said, laughing. “Caroline is a great person, and she played amazing golf today. You know, it was kind of difficult for him. But I wouldn’t be where I am without Jason, and he made sure that he kept me in the game.”
“It was a little funny,” Masson said of the way things played out. “I was happy—the shot into 18 [by Korda in the playoff], you can’t do anything but just applaud, and you know, I’m quite happy to see them win. I’m proud of them and proud of the two of them, the way they work together, and hopefully I get another chance to beat them down the stretch the next few years.”
It was also a special family moment for Korda in that it was her first LPGA victory with her older sister, Jessica, also playing.
It would be nice to see Masson win before she ties the knot with McDede.