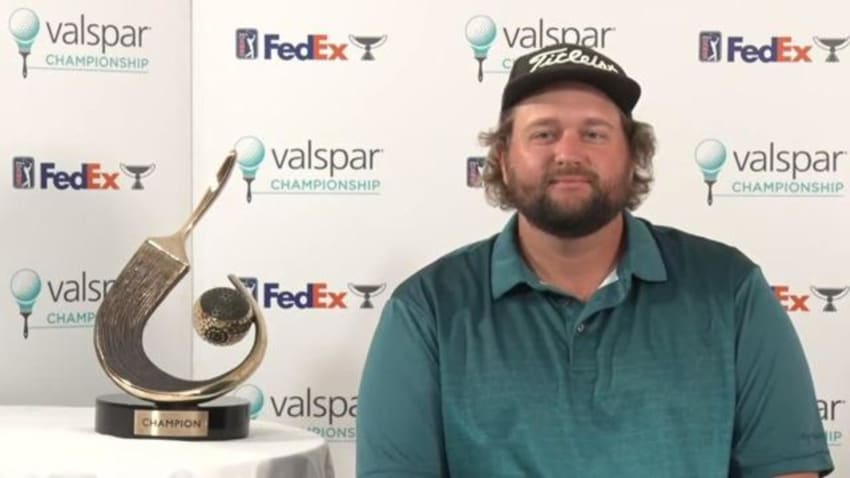 It has been a long time coming, but on Monday a dream came true for Sarasota’s Michael Visacki.
The 27-year-old mini-tour pro Monday-qualified for this week’s Valspar Championship and called home to break the news. “I made it,” he croaks amid the tears, his father alternately cheering and crying.

The hundreds of thousands of miles driven on his 2010 Honda Accord. The job cleaning carts. The ball that got stuck in a tree and led to a heartbreaking double bogey in the second stage of Q School in 2019. Visacki, who still lives at home with his parents, has come a long way to arrive at his first PGA TOUR start since turning pro in 2014, and the viral video shows just how long.

“Just a lot of people give up on their dreams, probably because they can’t afford it,” Visacki said in a press conference Tuesday afternoon, when he was again overcome by emotion as he tried to explain the public’s reaction to his emerging story. “But I’ve been lucky enough to be with my parents and been able to help me out sometimes to keep living it.”

Visacki is an only child. His parents, Mike and Donna, own a transport company that ships wheelchairs and stretchers and have done so for about 16 or 17 years. Michael showed great talent as a junior golfer, but developing that talent sometimes proved too costly.

“Tournaments would want us to register about two weeks in advance to know that they had so many players in,” he said. “And sometimes money was tight where my parents would call the director and be like, ‘Do you mind putting my son in? I’ll have the money for you when we get to the event.’ And they knew that I was a really good junior golfer, so they would accept that, they would waive that restriction for me back in the junior days.”

And Visacki was good. Having played tennis as a boy, he switched to golf at age 8, inspired by his dad. He grew so big and strong the Riverview High School football coach wanted to put him on the offensive line, but Visacki said no, he was a golfer. The coach soon realized he was right. Visacki played one year for the University of Central Florida, then turned pro.


Playing 30-45 tournaments a year, he racked up 37 victories on the West Florida Pro Golf Tour and made his reputation as a big-time talent. He qualified for the Korn Ferry Tour’s 2018 Kansas City Golf Classic and finished T27. He lived at home to save money and bought a used Honda Accord he’s since driven 170,000 miles, at one point driving to Utah and back.

He tried “six or seven” Monday qualifiers, but the closest he had come before this week was missing a playoff by a shot. Keep your head down, his dad told him. Keep grinding.

“Because he knew that I had it,” Visacki said.

He worked in the cart barn and pro shop at Serenoa Golf Club in Sarasota to make ends meet, sometimes closing the pro shop at 5, 6 o’clock and then hustling out onto the course to chase the sun. Never, he said, did he consider quitting. Not even after his ball got stuck in the tree to derail his Q School hopes by one shot in 2019, an agonizing close call that nearly broke him.

“I don’t know how I was able to even drive,” he said of his somber ride home.

His dream of playing his way into the Valspar almost fizzled when his tee shot stopped just short of going into a bush on the first extra hole. He chipped out sideways and got up and down from 107 yards and survived when Chris Baker missed his birdie putt.

Visacki had his own birdie try from 20 feet on the second extra hole.

“The first thing I was like, man, I have a chance to, if I make this putt I’m playing, I’m going to be playing in the Valspar,” he said. “But after that I was like, OK, I got to not think about that, I got to think about putting the best stroke possible, picking out a good line with me and my caddie and we picked out a great line and I hit the spot and it went in the hole.”

Visacki embraced his caddie Kaylor Steger, a friend and fellow pro, and broke down. Then came the freighted phone call, and the viral video, and his reputation quickly growing far beyond all those mini-tour victories. Of his chances at establishing a foothold on the Korn Ferry Tour and/or PGA TOUR, and finally being able to make a decent living as a golfer, Visacki said, “I mean I think it’s just trying to get one percent better every day. I feel like I’m not that far off.”

He added, not without ample evidence, “I know I’m capable of doing it.”

For the Valspar’s newest fan favorite, the dream is coming together right before our eyes.