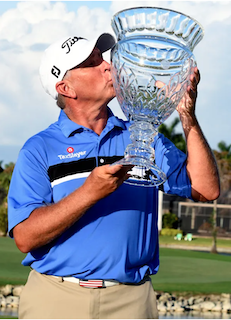 The first time in its history, Naples’ PGA Tour Champions event won’t be played in February.

The PGA Tour Champions released its 2021 schedule Monday, and the Chubb Classic Presented by SERVPRO will move from Feb. 8-14 to April 12-18.

The event will still be played on the Black Course at Tiburón Golf Club at the Ritz-Carlton Golf Resort, as was announced last month. That agreement is for one year.

The tournament has been played in February since its inception as the Aetna Classic at The Club Pelican Bay in 1988.

Since the move of Boca Raton’s Champions Tour event from a usual February start to the fall and into the Charles Schwab Cup playoffs in 2020, there is no other Florida event that will be affected by the Chubb’s move.

The tour will start Jan. 18-24 at the Mitsubishi Electric Championship at Hualalai in Hawaii, then the Cologuard Classic in Tucson, Arizona, from Feb. 22-28, and the Hoag Classic from March 1-7 in Newport Beach, California.

Then come to Naples. The next event after that will be the Insperity Invitational in The Woodlands, Texas, from April 26-May 2.

“I’m very proud of how PGA Tour Champions players, partners, staff and all our constituents worked together to complete a successful 2020, and I’m looking forward to carrying that momentum into 2021,” PGA Tour Champions President Miller Brady said. “We’re excited to return to communities that embrace PGA Tour Champions so our legendary players can re-connect with fans and help generate charitable dollars.”

The annual PGA Tour Champions event will once again feature tour players competing over 54 holes for a share of $1.6 million. Scott Parel pulled away from Bernhard Langer and Fred Couples to win at The Classics at Lely Resort in February.

Chubb, which was previously known as ACE Group before a merger with that company taking on the Chubb name, has been the title sponsor since 1999. Eiger Marketing is replacing Octagon as the tournament owner and manager for 2021.