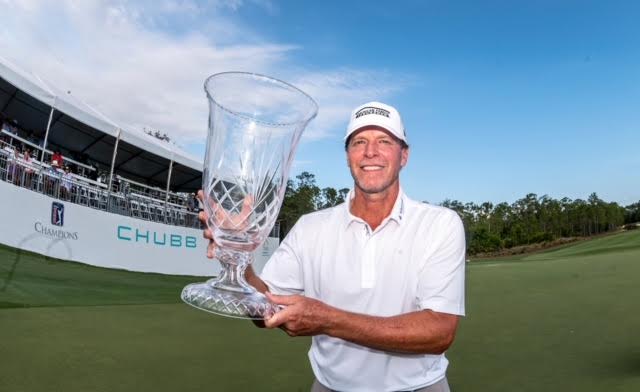 NAPLES- Former Naples resident Steve Stricker hung on to win The PGA TOUR Champions Chubb Classic by one stroke Sunday on the Black Course at Tiburon Golf Club. Stricker shot a five-under 67 for a 16-under par total for the 54-hole tournament.

Second round co-leader Fred Couples was charging on the back nine Sunday with birdies on the 11th and 14th holes to get within one shot of Stricker before a wayward tee shot into an unplayable lie on the 15th hole lead to a bogey that dropped him two shots back.

Stricker birdied the par-4 16th to widen his lead to two and parred in to grab the win.

“Yeah, I could have made it a little easier on myself for sure,” said Stricker after he finished. “I knew exactly where I was. I told Nikki (his wife and caddy) when we were going down 14, I said, let’s get two out of these next three, and I hit it in there at 14 and 15 and missed them both and hit it in there at 16, but if I could have made a couple more putts, it would have been a little bit easier. But it’s tough to win. It’s tough to win anywhere, and I’m happy to get it done.”

Sweden’s Robert Karlsson, the second-round co-leader, made four birdies on the final nine holes but bogeyed the 14th which ended up being the difference. “The problems were earlier,” he said in a post round interview. “I was very happy the way I played through the week. Today felt a bit uncomfortable. It’s a long time since I’ve been up there. Yeah, it was nice to be up there. I played really well the last few holes. A bit unlucky on 14. I hit a great tee shot and it just trickled into the trap, but a lot of good stuff and stuff to bring along for the future.”

Monday qualifier Alex Cejka shot 4-under Sunday to grab T-2 with Karlsson which automatically guaranteed his entry into the next PGA TOUR Champions.

Tim Petrovic, who had a rather undistinguished PGA Tour career, continues to take advantage of the over 50-second chance PGA TOUR Champions. His 7-under 65 was low round of the day (that included two bogeys) and vaulted him into T-4 with Kevin Sutherland.

“Just had one three-putt and just pretty much kept everything in front of me and just tried to stay patient because the greens are — I mean, they look like pool tables, but they’re tricky,” commented Petrovic. “There’s a lot of grain in them. We had one hole today where I think Vijay — we had three guys putting from 30 feet. One guy missed four feet left, one guy missed four feet right, and I missed two feet — you just don’t see that, so that shows you just how tricky they are.”

Bernhard Langer, who has dominated this tour for years was gracious in his post round comments about the winner after his two under left him in a tie for sixth with Couples, “He played extremely solid, never really made a mistake, he just kept the ball in play, hit good shots, and made a couple of good putts but had a couple other chances, too. He played really, really steady, just the way you’re supposed to play around here. Hit a lot of 3-woods off the tee, but he’s pretty long still, and yeah, gave himself lots of looks and never had any total stress to get up-and-down or anything like that.”