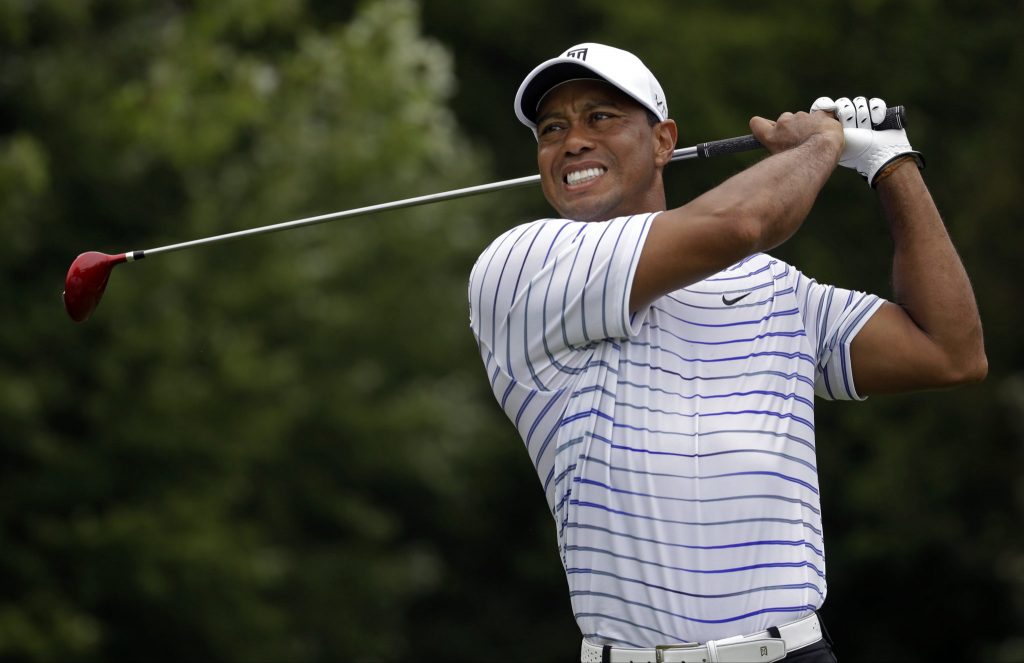 OK, so I didn’t pick Tiger Woods to win the Masters. Neither did a lot of other so-called experts.  Little did we figure that Brooks  Koepka’s putter would  take a nap over the last five holes. on Sunday at Augusta National.

Now, the obvious question is: Can  Tiger win the 2019 PGA Championship, which has been moved up from its typical August date to May as the second major of the season.
This year, the Bethpage Black course in New York will host the historic event beginning on Thursday, May 16. The famed public course hosted the U.S. Open in 2002 and 2009 and boasts a par of 71. Tiger Woods won the 2002 U.S. Open at Bethpage Black, so he has history on his side and is installed as the 17-2 favorite in the latest 2019 PGA Championship odds. Woods just snapped his 11-year major drought with a win at the Masters and will reportedly not play until the PGA Championship 2019. Dustin Johnson, the No. 1 player in the world and runner-up at Augusta, is at 19-2 PGA Championship odds. Before you make your 2019 PGA Championship picks, listen to the PGA predictions from the SportsLine Projection Model.

SportsLine’s prediction model, built by DFS pro Mike McClure, has nailed four majors entering the weekend and called Tiger Woods’ deep run in the last PGA Championship despite being a 25-1 long shot. The model has been spot-on early in the 2018-19 season. It was high on champion Rory McIlroy at the 2019 Players Championship, projecting him as one of the top two contenders from the start. It also correctly predicted Brooks Koepka’s (9-1) victory at the CJ Cup. Additionally, it correctly called Bryson DeChambeau’s (9-1) seven-shot victory at the Omega Dubai Desert Classic. Anyone who has followed the model is way up.

Now with the 2019 PGA Championship field taking shape, SportsLine simulated the event 10,000 times, and the results were surprising. One huge shocker the model is calling for: Woods, a four-time champion, reigning Masters winner, and the top Vegas favorite, doesn’t even crack the top five.

Woods is coming off one of the most historic victories in recent memory at the 2019 Masters. The 15-time major champion shot a 2-under par 70 to win his first green jacket since 2005 and his first major since the 2008 U.S. Open. His victory at Augusta National was the first time in his career that he came from behind to win a major.

However, Woods struggled in 2012 at The Barclays, his last start at Bethpage. He finished the tournament at 1-over par after shooting a final-round 76, a 38th-place finish. SportsLine’s model isn’t calling for back-to-back major victories and sees far better values in this loaded field than the 17-2 premium he’s commanding, lower than the 14-1 he was fetching at the Masters.

Another surprise: Justin Rose, an 18-1 long shot, makes a strong run at the title. He has a much better chance to win it all than his odds imply, so he’s a target for anyone looking for a huge payday.

Rose missed the cut at the 2019 Masters, but still has an Official World Golf Ranking of No. 2. He won the 2019 Farmers Insurance Open and has finished in the top 10 in all but five of the last 15 events he’s played worldwide. He owns three career top-10 finishes in the PGA Championship and finished 19th last year at Bellerive.

The 38-year-old has a well-rounded game, ranking in the top 60 in all four major strokes-gained categories. He is 15th in total strokes-gained (1.495 shots per round over the average tour player) this season, giving him an instant edge over the rest of the 2019 PGA Championship contenders. In 2018, he finished second in that same category and has five worldwide wins dating back to October 2017. Rose has all the tools needed to climb the 2019 PGA Championship leaderboard in a hurry and could fly under the radar despite his strong credentials.

Also, the model says four other golfers with 2019 PGA Championship odds of 18-1 or longer make a strong run at the title. Anyone who backs these underdogs could hit it big.

GOLF NEWS
COMMENT: THERE NO LOSERS IN MATCH FOR CHARITY

After it was over I am not sure any of the participants cared about the outcome, but it will go down a 1-up win for Tiger Woods and Peyton Manning