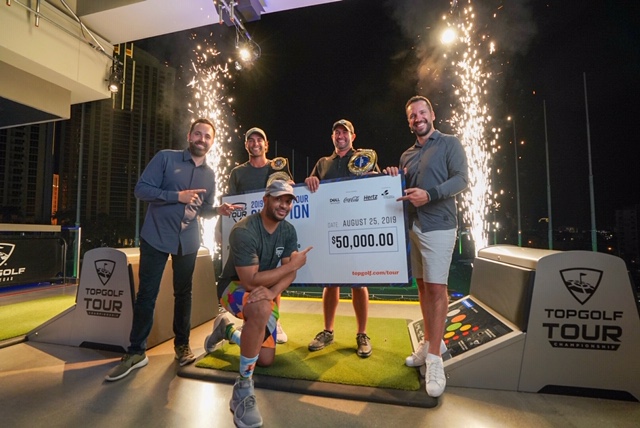 Nick Huston and cousin Travis Huston were just happy to qualify for the 2019 TopGolf Tour Championship in Las Vegas August 23-29, 2019. After winning a regional competition in Orlando last June, they earned their ticket to Las Vegas, which included airfare, hotel accommodations and meals for three days. They competed again twenty teams  – 16 other teams from across the U.S., one military team, and teams from the United Kingdom and Australia.

On Sunday night, August 25th Nick and Travis emerged as the finalists against Team Atlanta. They had to win two out of three TopGolf games to win the title. They won the first game, dropped the second, then won the pressure-packed third game to take home the $50,000 winner’s check.

Nick and Travis are both golf professionals at The Landings Golf Club, a family-owned golf course in Clearwater, Florida. Nick put a giant exclamation point on the trip by marrying his long-time girlfriend Dee Dee the following Monday while still in Las Vegas. Congratulations to Nick, Travis AND Dee Dee!