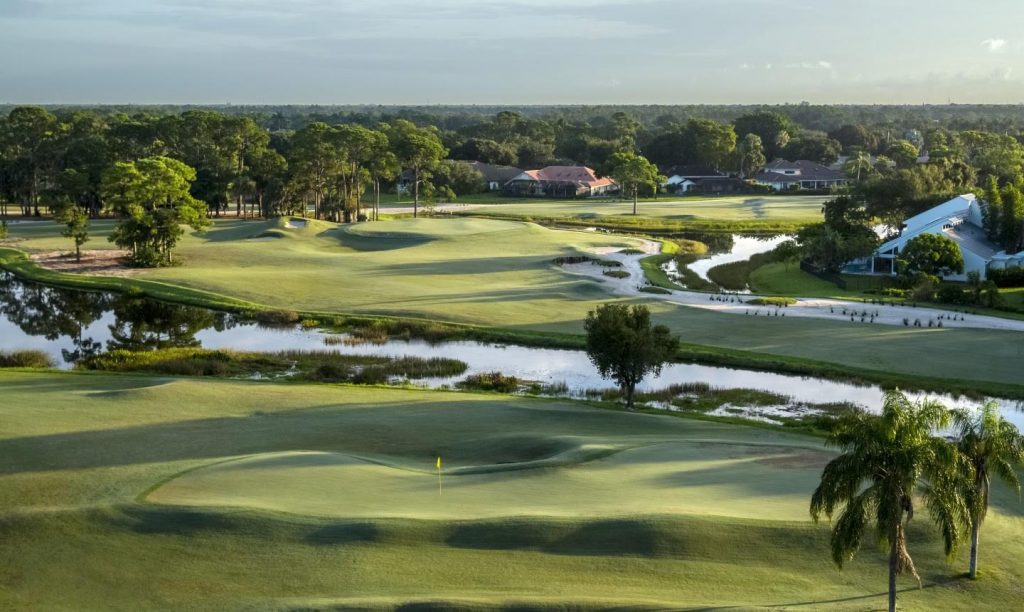 With a radical concept and engaging design, The Match golf course at PGA National Resort & Spa points toward a more creative future for the game in America.

Have you ever played a golf course with its own manifesto?I have. It’s The Match at PGA National Resort, a total redesign of the resort’s old Squire layout by architect Andy Staples. It’s not just a golf course: it’s a punk-rock finger in the face of deep-rooted norms of American golf.

As its name suggests, The Match is all about match-play golf. That a foursome opt to pair off and play some sort of game instead of simply count their own strokes is not a suggestion, but as close to a requirement as is possible without an assistant pro hovering over each group.

For club members and resort guests who are not experienced in match play, there is the aforementioned manifesto, which takes the form of an attractively printed set of house rules and suggestions for the type of competitions a group might try. In addition to standard Four-Ball, there are less common games like Greensomes, Bingo-Bango-Bongo and even “Stapleford,” which assigns rising point values for scores of 7 or lower on a given hole.

But two common golf elements missing from the experience at The Match are most central to its charm. First, there is no official course par. That means there’s no such thing as a birdie or bogey. There is only the task of trying to make the lowest score possible on a given hole, hopefully a score lower than your opponent has made.

The second missing element: tee markers. Because The Match’s entire nature hinges on competition within a single group, there is no need to force people to all play from the same places. The procedure here is for one side to pick the spot from which the group will play each hole. Each tee area – many of them are contiguous and meander for a hundred yards or more – is bracketed by wooden, nautical-themed stanchions (a nod, like the course logo, to a sailboat that was parked in a pond during the 1983 Ryder Cup on property) that display the hole number and yardage.

The attractive scorecard only furnishes two yardages for each hole. The sum of the minimum yardages is less than 3,500, while the maximum distance golfers may face is 5,841 yards. If that sounds short to you, you are mistaken: The Match has eight holes over 400 yards, plus the 189-yard sixth, 181-yard 11th and the 198-yard finisher. You will hit every club in the bag there.

This flexibility encourages golfers to participate actively in the design of the course during every single round, reacting to factors like wind direction and strength, not to mention the state of their matches, in order to mold the course in their own image of competitive fun. A perfect example is the 16th hole, whose maximum yardage is a par-defying 268 yards, with a shallow, tabletop green guarded by a bunker right and three tiny knobs short. Golfers may choose to play it all the way back, or push their ad hoc tees as far forward as the 150-yard mark. In the prime winter season, it may not be possible to fly a ball onto and hold the putting surface, inviting a dilemma over trying a risky run-up tee shot or a layup and a wedge.

“If someone mindlessly hits a driver up there, they’re going to be short and they might have an uneven lie,” Staples said of the unorthodox proposition the hole can present, “when in fact they should have just hit a 5-iron and then had a full-swing wedge into that green.”

During the course’s grand opening last Friday, my group settled on the 200-yard mark. Faced with an exacting shot, I made my best swing of the day, hitting a 4-iron to eight feet and sinking the putt to win the hole for my partner and me.

Designing a course for match play freed Staples up to take some risks with certain features. “I didn’t necessarily worry about things that you would normally worry about if you were trying to do a par-72, 7,000-yard golf course,” he said.

Indeed, many of The Match’s green complexes are adventurous, even severe in places. Several are inspired by the template concepts of C.B. Macdonald and Seth Raynor. Holes 10 and 11 are Road and Redan holes, respectively, and the course ends on a classic Biarritz, with a 70-yard-long green bracketed by bunkers and bisected by a three-foot deep trench across the middle.

There is scant formal grass rough on the course; fairway-length turf dominates, with coquina paths and waste areas lining many landing areas instead. Even though housing borders both sides of many holes, the corridors never feel cramped and the compelling features of the course draw the eye away from the homes.

When golf standards like par and stroke play are thrown out the window, there is room for golfers to choose their own adventure, a concept completely foreign to all but a small handful of private, match-play-focused American clubs like Ballyneal in Colorado or Ohoopee Match Club in Georgia.

Unlike those super-private enclaves, PGA National welcomes resort guests in addition to golf club members. Guest fees for this coming winter season are expected to top out at $225.

The iconoclastic design and philosophy behind The Match envision a world where golf courses are less confining in their setups and instead empower their customers to curate their playing experience. Almost every restaurant offers diners a range of food choices; why does nearly every golf course impose the equivalent of a set tasting menu on the customer?

At The Match, with the blessing of new resort ownership in Brookfield Asset Management, Andy Staples seeks to popularize a way for golfers to interact with a golf course that has the potential to move the game toward a more creative future.

“I hope it gives a glimpse into a form of golf that’s always existed but has been washed away slowly but surely over years,” he said. “We have seen golf be presented in a very monolithic way for the last 30 years at least, and if nothing else, if [The Match] gets you thinking about the fact that a landscape can be played in a whole variety of different ways, then I think we’ve won.”

Tiger Woods wasn’t part of this U.S. Ryder Cup team because of a possible career-ending automobile injury last winter, but in many other ways, he was a major influence. More

GOLF TIP OF THE WEEK Putting is probably the most distinctive and individual part of the game. There are many different putter head shapes, grips, the way you hold the