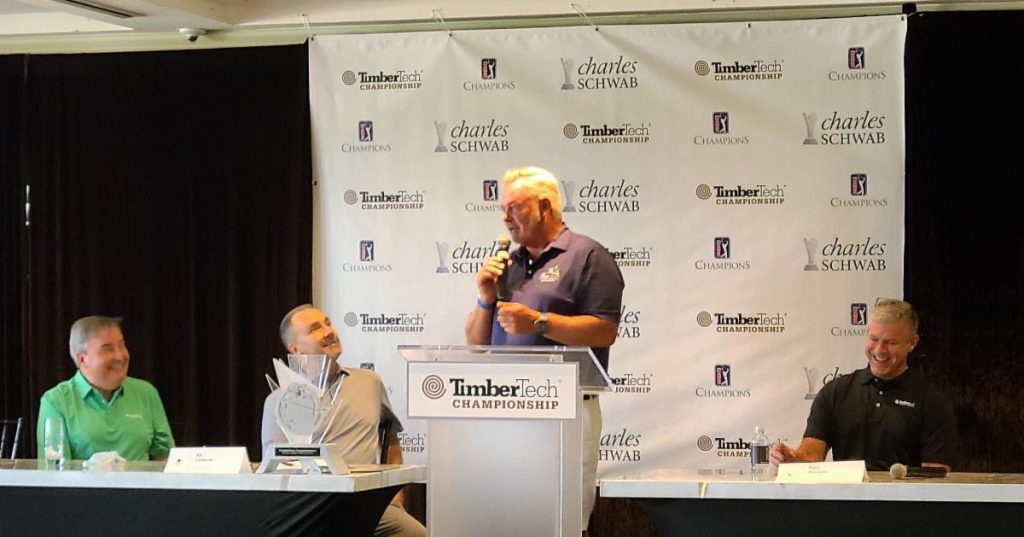 Once he started winning again, he hasn’t stopped.

The Northern Irishman won his next start, this year’s season-opener in Hawaii, and his last start at Sanford International. He arrived at Monday’s Media Day for the TimberTech Championship ninth on the PGA TOUR Champions’ money list, hoping to defend his TimberTech Championship title when the TOUR’s second playoff event is held Nov. 5-7 in Boca Raton.

While Clarke’s emotional victory in the 2011 British Open at 42 tops his career highlights, lifting the trophy at the TimberTech Championship ranks up there for the 53-year-old defending champion.

“Winning the TimberTech Championship was huge for me because it proved I could win again,” Clarke said. “Nine years is a long time. Once I broke through in Boca, I sort of liked that feeling. To start winning again is certainly very gratifying.”

Clarke birdied the 18th hole on The Old Course to finish a shot ahead of Jim Furyk and Bernhard Langer, the hometown Hall of Famer who was trying to become the tournament’s first three-time winner. Clarke earned $300,000 for his first victory on the PGA TOUR Champions in his 40th start.

The 2021 TimberTech Championship transitions from a full-field event to the second event in the Charles Schwab Cup Playoffs. It will include the top 54 players on the tour’s money list after the first playoff event. Every player has to earn his way to Broken Sound Club based on their performance during the last 22 months; there are no exemptions.

Paradise Island, Bahamas – The Ocean Club Golf Course at Atlantis Paradise Island is set to host some of the top collegiate golf teams during the White Sands Bahamas NCAA Invitational,