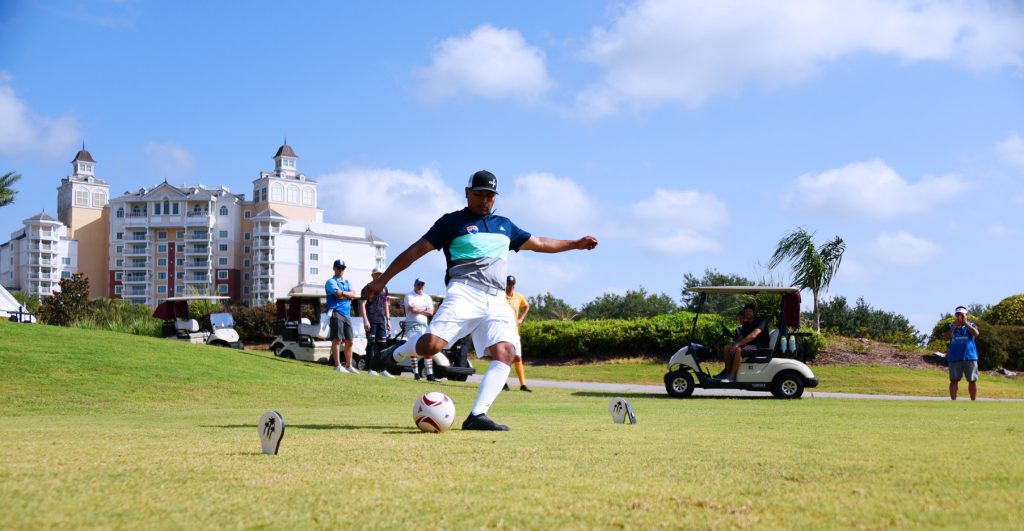 Kissimmee, Fl.–If history is any indication, the U.S. FootGolf Open played at the Reunion Resort’s Nicklaus course is likely to go down to the final kicks.

Sharif Khatib of Los Angeles seeks to defend his 2019 championship in an international field that will include 2018 Ben Clarke of Berhamsted, UK and Matias Perrone of Argentina, the reigning FIFG FootGolf World Champion who captured the inaugural U.S. FootGolf Open in 2014.

This week’s tournament marks the fourth time the U.S. FootGolf Open will be played at Reunion but the first on the newly-upgraded par-72 Jack Nicklaus course. The U.S. and Mexico Opens feature a combined $20,000 in prize money, plus U.S. Open competitors in the Men’s Division are vying for two guaranteed spots in the FootGolf World Cup.

FootGolf came to the United States in 2011, but it was the creation of the U.S. Pro-Am Tour–and with it the U.S. FootGolf Open in 2014– that spurred interest in the country on an international level and helped advance the performance of U.S. competitors.

“The 2014 U.S Open with its cash purse of $25,000, was the first FootGolf competition in the country to give players a feeling of becoming professionals in the sport they love,” said Laura Balestrini, co-founder, President and CEO of the American FootGolf League (AFGL).

Another turning point came in 2016 when the AFGL, the governing body of the Major League Sport of FootGolf in the U.S. created the AFGL Tour. That same year the Women’s and Senior Divisions’ champions were crowned at the Open.

“The Open has become very important to our FootGolf world,” added Balestrini. “In 2019 we hosted players from 20 countries and across America. The passion, competitiveness, and immense desire to be recognized as champions by their peers have inspired the players to do everything possible to get to that final hole with a chance to win one of the most prestigious competitions in the young sport.”